(CNN)UFC 267 is looking to be must-see viewing for fight fans.The event, taking place on Saturday, will see two huge title fights take place in the Octagon on Yas Island, Abu Dhabi, which are sure to have huge consequences.In the main event, current UFC light heavyweight champion Jan Błachowicz will put his title on the line as he faces off against Glover Teixeira.

The 42-year-old Teixeira, who holds the UFC all-time records for most submissions and finishes in the light heavyweight division, was expected to face Błachowicz on September 25 at UFC 266 but the bout was postponed and moved to Saturday. 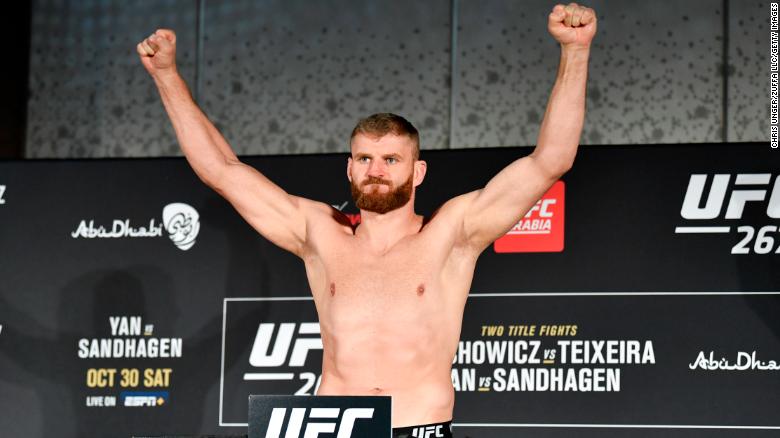 Blachowicz poses on the scale during the UFC 267 weigh-in.Błachowicz will be making his second defense of his title, having beaten Israel Adesanya in March by unanimous decision, while it is Teixeira’s second shot at a UFC title.Both fighters had no issues achieving their weights for the weigh-in and the stage is set for a blockbuster bout between the two best fighters in the division.In the fight before the main event, a highly-anticipated rematch between current bantamweight champion Aljamain Sterling and former champion Petr Yan was expected after their dramatic fight earlier this year, when Sterling won the title via disqualification.However, the American withdrew citing a lingering neck issue, so Cory Sandhagen has stepped in to face the Russian in what will determine the interim bantamweight champion.READ: African-born UFC champions the stars of a new era of fighters from the continentYan’s loss to Sterling last time out was only the second of his career, and he will be out to return to winning ways when he takes to the ring against Sandhagen.Sandhagen has never fought for a UFC title belt, although the 29-year-old is No. 3 in the UFC bantamweight rankings.The UFC has been hosting events in Abu Dhabi as a result of the coronavirus pandemic and the restrictions that have resulted from it.In June last year, UFC President Dana White chose Yas Island to ensure a safe environment, where the Department of Culture and Tourism for Abu Dhabi (DCT Abu Dhabi) sealed off the nearly 10-square-mile (25 km) island, which included an arena, hotel, training facilities and dining establishments.Visit CNN.com/sport for more news, features, and videos 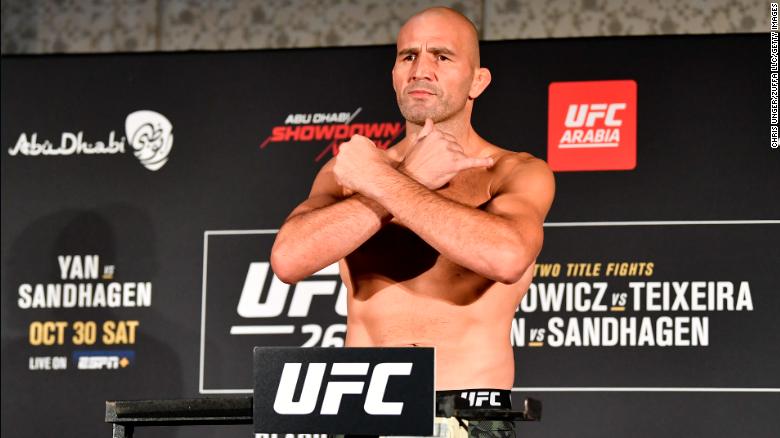 Teixeira poses on the scale during the UFC 267 weigh-in.The main card is slated to begin at 2 p.m. ET, with the preliminary card starting at 10:30 a.m. ET.

Here’s how to watch the blockbuster event on Saturday

Europe’s drought on course to be worst for 500 years,

Europe’s drought on course to be worst for

This year is set to be even worse than in 2018, when unusually favourable conditions in some parts of the

This deal marks one of the biggest purchases made since Beijing’s anti-monopoly crackdown on tech companies started, in late 2020.

As Kenyans await the outcome of Tuesday’s election, they are wondering if Martha Karua might be their first female vice

The CDC continues to upgrade locations to its

Look amazing whether on vacation or on a casual day out by wearing the perfect summer dress. ADAMKONTOR/ PIXABAY With

Man charged with killing Muslim men in US

Altaf Hussain cries over the grave of his brother Aftab Hussein at Fairview Memorial Park on Friday, Aug 5, 2022.

Revolutionary Japanese fashion designer Issey Miyake has died aged 84, his company has announced. Known for his innovative styles and