(CNN)India cricket captain Virat Kohli has criticized the “spineless people on social media” who attacked the team’s bowler Mohammed Shami over his religion following the team’s loss to Pakistan in a T20 World Cup match.”To me, attacking someone over their religion is the most pathetic thing that a human being can do,” Kohli told reporters in a press conference Saturday, ahead of India’s Sunday match against New Zealand.”Everyone has the right to voice their opinion and what they feel about a certain situation, but I personally have never ever even thought of discriminating anyone over their religion — and that is a very sacred and a personal thing to every human being, and that should be left there,” he added.

Bowler Shami, the only Muslim player in India’s squad, was targeted with vitriolic social media abuse — including Islamophobic messages — by social media trolls who blamed him for India’s first ever loss to Pakistan in a T20 World Cup match on October 25.

Despite hateful comments on Shami’s social media telling him to leave India and go to Pakistan, many Indian fans as well as national media outlet Zee News have claimed the hateful comments were posted by Pakistani bots with an anti-Indian agenda.India’s captain was unequivocal in his support for Shami and firmly condemned the social media hate, saying he didn’t “want to waste one minute” on the trolls, whose “lack of self-confidence” and “lack of compassion” led them to target Shami.The comments came after calls for Kohli to speak out, with journalists Rana Ayyub and Barkha Dutt saying it was ironic for the team to take a knee for the Black Lives Matter movement but not condemn Islamophobia towards their own player. 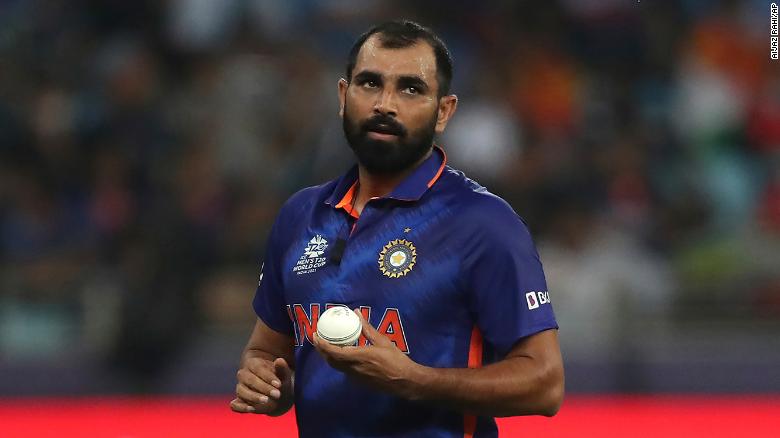 India’s Mohammed Shami prepares to bowl his next delivery during the Cricket Twenty20 World Cup match between India and Pakistan in Dubai, UAE, Sunday, Oct. 24, 2021.”We stand by him fully, we’re backing him 200% and all those who have attacked him can come with more force if they want to,” Kohli said. “Our brotherhood, our friendship within the team — nothing can be shaken.””And I can guarantee you that as the captain of the team, that we have built a culture where these things will not even infiltrate into this environment 0.001%, and that is an absolute guarantee from my side,” he added.The captain further denounced the nature of social media trolling, saying it was “so unfortunate and so sad” that it had become a “source of entertainment in today’s world,” and was an example of “literally the lowest level of human potential.”

Indian politicians and celebrities have posted messages of support for Shami on social media, with former cricket captain Sachin Tendulkar calling him a “committed, world-class bowler.”Following his remarks on Saturday, Kohli has been praised by some on social media for coming to Shami’s defense, but has also been criticized by nationalists who have accused him of pointing the finger at Indian social media users rather than Pakistani fans.India will play New Zealand later on Sunday before taking on Afghanistan, Scotland and Namibia in early November in the hopes of advancing to the semi-finals of the T20 World Cup.

The team’s last win in the tournament was in its inaugural edition held in 2007, where they played Pakistan in the final. Kohli was named player of the series in the last tournament in 2016, although India did not make it to the final.Kohli announced in September he would step down as India’s T20 captain after this year’s tournament, saying he needed to “give himself space” for proper preparation to continue captaining the team in Test and One-Day International (ODI) format matches.

A Sri Lankan from Victoria has qualified for the Miss

Ten passengers were hurt, three seriously, when they tried to escape a train that became caught up in a sweeping

A Sri Lankan from Victoria has qualified for

Himaya Vijayaweera (19) of Sri Lanka is representing Victoria in the 2022 Miss Earth Australian National Finals. She arrived in

Thai bomb squad personnel inspect the damage at the Bangchak gas station after an attack, in Nong Chik district in

FILE PHOTO: Tesla CEO Elon Musk looks on as he visits the construction site of Tesla’s gigafactory in Gruenheide, near